This solution is part of the of the DECON-UVMNP project which encourages designing prototypes to solve issues caused by SARS-CoV-2. The prototypes will be made and tested both under laboratory conditions and within a clinical/hospital environment in order to reach the technological maturity level of TRL=8.

The transmission of the SARS-CoV-2 virus by aerosols may be possible by extended exposure, or exposure to increased concentrations of such aerosols in closed premises. Internationally, surveys showed that the exposure of the samples contaminated with viruses to temperatures over 650C may determine the inactivation of the viruses. A method for cleaning the air in closed premises is by using methods of air recirculation through microwave systems. Microwaves are electromagnetic radiations with frequencies between 300 MHz and 300 GHz, which are very well absorbed by water and aerosols containing water. Upon the interaction between the electromagnetic radiations and the aerosols in the atmospheric air, the former are increasing their temperature as result of absorbing radiation. Considering that at high temperatures viruses may become inactive, and that the main transfer means for such viruses is the ambient air, the two-step microwave generator decontaminates the air inside closed premises by recycling it in high intensity microwave fields.

The two-step microwave generator for air decontamination is based on a new concept of using resonated cavities (in the TMxxx transversal magnetic module), and on a wolfram or graphite non-contact electrode that concentrates the electromagnetic field in one point.

By using such configuration, in the focal point of the resonated cavity very high temperatures and intense electric fields of 3MV/m-6MV/m are reached at a microwave power of just 700W. The forced recirculation of the air through the high temperature and intense electric field area leads to the sterilisation of the biological microorganisms, and thus to air decontamination. 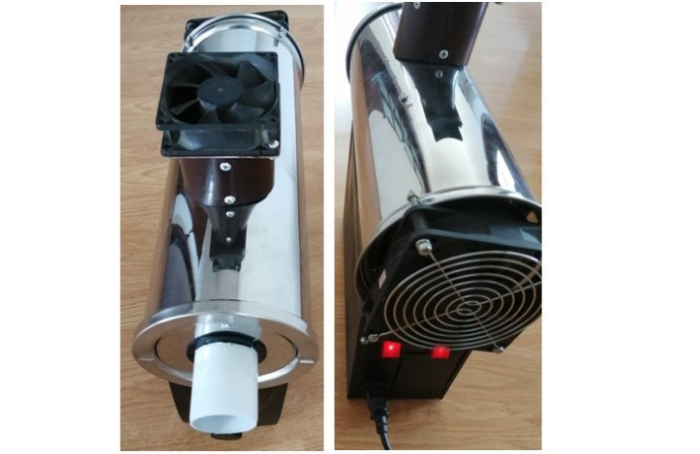