The GREAT Campus is a science technology park located on the Erzelli hill in Genoa, in Northwest Italy. Carlo Castellano, CEO of Esaote S.p.A., and Giuseppe Rasero, former director of the Institute formed the GREAT campus for Industrial Reconstruction (IRI) in the early 2000’s. As a relatively new park, part is still under construction while part is already functioning. Now, it hosts several high tech corporations such as Ericsson, Siemens, and Esaote, in addition to a robotics laboratory of the Italian Institute of Technology (IIT) and other companies.

Upon completion of its final phase of construction it is estimated that the park will exceed 100,000 square meters of industrial office space and 200 thousand square meters of green areas along the slopes of Monte Guano; sports, leisure and entertainment facilities will be set up here. The plan foresees that some 70% of the Village will be used for high tech and training/education with around 200 businesses established, 15,000 new users including 5,000 students and the creation of at least 6,000 jobs for highly qualified persons.  In 2021, the GREAT Campus will host the new Faculty of Engineering of the local University of Genoa. 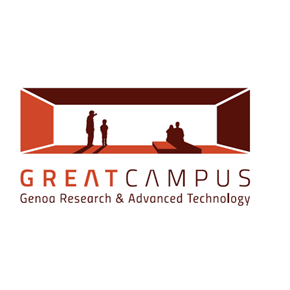