In 2009, The Konza Technopolis project was initiated with the procurement of a 5,000 acre parcel of land at Malili Ranch, 60km south east of Nairobi along Mombasa-Nairobi A109 road. With this, the realization of Africa’s Silicon Savannah officially launched.

The first phase of Konza City is expected to create over 20,000 direct and indirect jobs. The city will be developed as a public private partnership, in which the Government will take a minimal role, developing the public infrastructure and regulatory guidelines.

Konza is planned as a mixed-use, high density walkable city that accommodates a diversity of programmes and districts. By avoiding superblocks and auto-orientated roadways, Konza aims to be a livable, sustainable urban environment that encourages high-value development and discourages sprawl. Planning will take cues from successful global urban centers, yet be specific to the needs of Kenya and the region.

As a smart city, Konza will gather data from smart devices and sensors embedded in the urban environment, such as roadways, buildings, and other assets. Collected data will be shared via a smart communications system and be analyzed by software that delivers valuable information and digitally enhanced services to Konza’s population. For example, roadway sensors will be able to monitor pedestrian and automobile traffic, and adjust traffic light timing accordingly to optimize traffic flows.

The master plan includes a university, a residential area, science and tech area, and an office band. The intersection of these zones create vivid connections and become points of interest that seed neighbourhoods of distinct character. The stitch master plan also contains a series of neighbourhood parks, located throughout the city with varied orientations. Most parks are connected to the green boulevard, a 60 meter parkscape and public transit corridor. 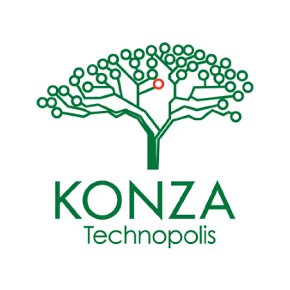